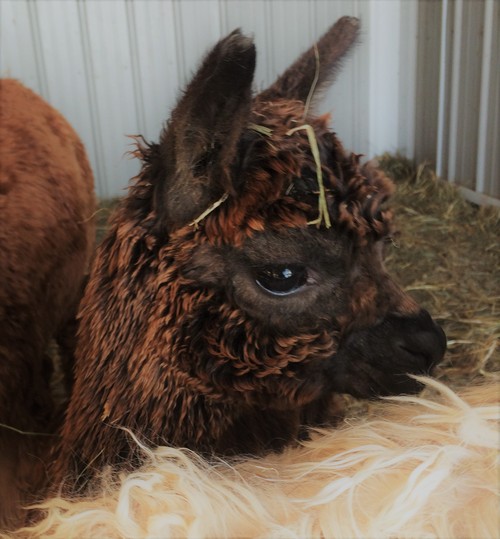 Hannah’s Faith is a fine fleeced lustrous bay black beauty! Though slightly smaller than her fellow cria mates with a petite build and a delicate head she has strength and grace. Her Mom, Felicity was a AOBA National Halter and Futurity winner with many of her offspring following in her footsteps. Felicity is pretty rare being 1/2 Accoyo and a rich maroon. Felicity is now 18 years old and Faith is her last cria. I feel confidant Faith will be one of her best. 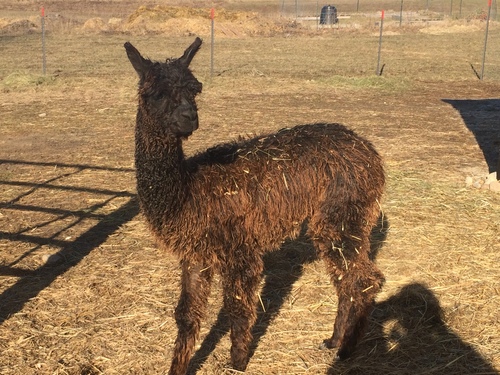 June Bug is taking after her Mom with a regal upright bearing. Her fleece is lustrous with consistent locks and density from her head to her tail. She is the princess of the cria crew, keeping everyone in line. She has smarts and is independent. She is frequently found by herself where she is always investigating the latest curiosity.
Her Mom, Benchmark’s Peruvian Song Bird is a Platinum Marquis daughter out of Miss Felicity.  Her Dad, Benchmark’s Accoyo Rafael, has a lustrous, dense fleece. He is a Jackpot’s Accoyo Aviator son. 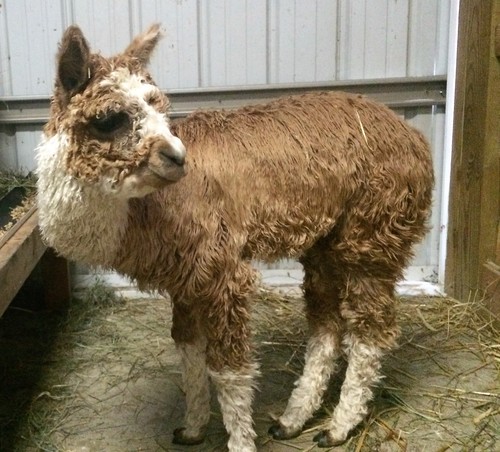 Sting Ray is a stunning dark fawn solid blanket pinto. He is dripping with luster, density, and consistent locks from his head to his tail. He has a perfect bite and a sweet, friendly disposition. He has four symmetrical white socks and a white collar. He is a solid broad chested boy who sits squarely on his frame. His dam, Twizzler is a lustrous white. Twizzler placed 2nd in the Suri Network All-Fleece show as a six year old. The judge said she had “some excellent luster throughout!”  His sire, Bo Jangles, has a blue ribbon to his name as does his dam, Miss Felicity and Bo’s full siblings. Sting Ray’s grand sire is the superlative DDF PERUVIAN MACGYVER!

Sting Ray is a perfect candidate for a fleece boy.

JBear has a sweet nature and though shy he is always up for an adventure.  He was our mascot at the local 4th of July parade and handled the noise, crowds and chaos like a seasoned veteran.  He has a lustrous consistent fleece with a regal upright bearing like his mom.  His conformation is perfect.  Bear and I have spent a lot of time together during the past year and I consider him my favorite if I was to confess to such a thing.  He is still a yearling but I feel confidant that he would be a welcome addition to any breeding program when he is mature enough or he would also be an outstanding fleece boy with his lustrous fleece and a wonderfully sweet 4H boy with his lovely dispostion.